Family Running.... and Some Fast Miles

Tweet
My two girls and I went out for a run. It was a bit cold at 38 and windy, but quite nice to run in. All three of us took off for the first 2 miles and I told Payton to go ahead and run and I would stay back with Ashlee since this was only the second time she had run 2 miles. Ashlee did good until about 1.5 miles again and then said she couldn't keep going. She complained quite a bit and said her legs were bleeding on the inside. :) We had to stop and walk a little bit off and on for the last .4 of the second mile but she completed it running.

After dropping Ashlee off Payton had a good 3 or 4 tenths of a mile on me. This was more than I anticipated because I didn't anticipate walking part of the second mile with Ashlee. I thought I would catch Payton by the 3 mile mark, but as hard as I ran I couldn't catch her. I ended up not catching her till about the 3.7 mile mark, it took me 1.7 miles to catch her. I was running down in the low 7's with a 7:25 and then a 7:17 just to try and catch her. That is the fastest I have run in quite some time.... probably since before starting training for the marathon.

Tweet
My oldest daughter, Ashlee, and I just got back from a cold run. It was 39 degrees, but "feels like" 30 with the wind. We went for a 2 mile run - this was her first 2 mile run ever! I am very proud of her, she didn't get too mad at me until about 1.6 :)
You may have read recently that she has decided that she wants to run distance in track this coming season. She has never been my runner, but she is taking it much better than I had anticipated. Last week we started with running 1 mile every other day and this week we are upping it to 2 miles every other day.

Ashlee, I am really proud of you!!!

Christmas Eve Run With The Girls

Tweet
Went out for a 4.25 mile run with my daughters following an early ended day at work.

Ashlee, Payton and I all ran the first mile and Ashlee did really good and kept it under 10:00 min pace again. Once we finished with the mile Payton and I went back out for a 3.25 mile run to finish it off. It was hard to get going but felt better the last mile and a half. A couple minutes after we got back home it started to rain so we just beat it :)

Merry Christmas all. I hope you have a great time with family and friends celebrating the traditions, the fun, the food, the gifts...... but most of all the true meaning of the season!

I Have Been Published - In Print! 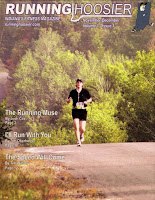 I was just recently excited and very honored to be published in a New Printed Running Magazine, the Running Hoosier. When I was approached with the opportunity I was nervous, but also more than willing to take on the challenge and see where it would lead. We were able to see the first steps pay off in mid November when the first issue was hot off of the press and hitting the streets.
My first article in the first issue was titled "The Speed Will Come" and is about trying to run too fast too soon and what can happen when you do so. I just had a real life example of this yesterday when I saw a friend of mine on crutches. She had tried pushing herself too hard and ran too fast and ended up with a stress fracture.
More information on how to subscribe can be found on the magazines website, or if you live in either Northern Indiana or Southwest Michigan you can pick it up locally at one of these ever growing locations or at a local race.
Tim Wilson - blog.262quest.com - subscribe - follow blog - virtual4now
Posted by Tim Wilson on 12/21/2009 7 comments:

Tweet
Today marked the first run of my oldest daughter, Ashlee..... well kinda! She ran a mile once before with Payton and I. The first time she ran the mile with Payton and I she was quite confident at the beginning, but by the end she was mad and saying she would never run again.
Ashlee just recently decided that she wanted to run distance in track, of which I am obviously very excited. She has a lot of work to do to get ready and get up to the distances she needs to be running and today was day one.
We went out to run just a mile, which started off really good. At about .2 she was still feeling good, but by the time we hit half way she was starting to feel tired and sore. By the time we hit .8 she wanted to quit. I wouldn't let her quit and she ended up making it the entire mile of which I was very proud of her. She ran the mile in just under 10 minutes at 9:57. Following the mile run she was complaining about her calves and wanting to sit down. We had about a .2 mile walk back to the house and I wouldn't let her sit down. She was complaining about her legs saying they hurt so bad and that I just didn't understand...... I just had to laugh :) (not because of the pain, but because she thought that I wouldn't understand)
She was not happy, but has since turned a bit and understands this is going to be hard at first. We will take a day off and then run another mile. She hasn't given up yet for which I am really proud of her :)
Following the mile with Ashlee, Payton and I went out for a 3 mile run. It was cold and windy, but still was a good run, although kinda difficult.
And once again, following that 3 mile run, my 8 year old son Brady and I went out for a mile run. It was hard for him to get up a couple of the hills but he didn't give up and ran the entire mile. He ran it in just over 10 minutes at 10:06.
All things being done I ran 5 miles and was tired and ready for lunch. I really enjoyed running with my three kids, now only if my wife would have gone out for a run I could have changed the title of this post to read "Everyone Went Running"

Tweet
I took a few days off following my little episode with my Hamstring last week.
I took four days off and then went out for a slow easy 2 miler on Tuesday to see how it felt. I paid really close attention to it and it felt pretty good until near the end when it got a little sore. The soreness was more like I had been running for a while and not like the pain I had at the end of the run where I hurt it.
Thursday I went out for another 2 miler. I wanted to go three but had some issues at work that took precedence and caused me to not have enough time to do the 3 miles. These two miles felt better than the first run but my hamstring is still not 100%.
Today, Payton and I went out for 3 miles. We waited till afternoon to go and of course right before we walked out the door it started raining..... as if the 38 degrees wasn't bad enough already! Today's run I didn't even think about the hamstring until we were almost a mile in, and it didn't bother me at all the entire run...... this was really good to experience!

What Happened To My Hamstring?

Tweet
Thursday morning I got up as I have so many times for an early morning run. The run was going good, although very hard (must be all the food I have been eating lately that I shouldn't be) and as planned until the last mile.
My right hamstring started hurting last last 2 tenths of a mile and the last tenth of a mile I could barely walk it hurt so bad. I still had 2 tenths/mile to walk to get back home and it hurt with every step. By the time I got home it started feeling a bit better, but was still hurting the rest of the day.
I am still not really sure what happened but I have a thought. The only real thought that I could come up with was a muscle cramp brought on by a lack of hydration. I have not checked into this at all to see if this is a possibility, but I do know that muscle cramps can be brought on by a lack of hydration, and the way I have been hydrating lately it would be no surprise. The last couple weeks since the marathon I have not been drinking anywhere near enough water, and that coupled with the extra diet soda's that I have been drinking has left me quite dehydrated. I knew this was the case, but was not making the changes that I knew I needed to.
What are your thoughts? Have you had this happen to you before? What did you do when it did?
I have taken the last couple days off and plan to take at least a couple more days off. Following the first day my leg felt much better but is still not 100% and I can feel a twinge when I flex the hamstring muscle. I want to make sure I give it enough rest to resist long term injury, although it is hard because I really want to get out and run.
I hope this is not something that sticks with me for a long time..... :(

Time For Some Cold Running

Over the past couple weeks the colder running weather has arrived.
We spent Thanksgiving in Indiana and had our first cold weather run of the season. Thanksgiving morning Payton and I got up and headed out for a run in the windy, cold weather with a few sprinkles. It was 38 degrees outside and Payton came walking up to me dressed in shorts and a t-shirt. I just had to laugh at her and shake my head. I asked her where her warmer clothes were and she said she didn't bring any. She ended up borrowing warmer clothes from her sister so we could go running. The 5 mile run was cold, especially with the wind and few sprinkles, but overall was a nice run through the country roads of a very small town in Central Indiana.
This past week that cold weather arrived here in Georgia as well. Tuesday morning's run was a 34 degree run. The colder weather made it hard for me to get motivated to get out the door. It will take a couple cold runs and it will not be as difficult, but right now I still have to get to the point where I trust my clothing. It was a gorgeous morning with the crisp air, full moon, and a lot of fog. I really need to get some better cold weather running gear..... maybe one of these days! :)
I think the cold weather is here to stay..... at least for now.