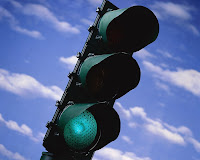 I received the news at my Friday doctor appointment......
The news that I received was the good news that I had been waiting for..... the news I had been waiting for for over 7 months.
The doctor has given me the green light.  The x-rays look good and he told me I could start doing whatever I felt like doing.  As you are aware, I have started back to running, but I have only been back to the gym to do any weight lifting just one time since the surgery to remove the pin.  He told me, that if it was comfortable I could even get back to doing some pushups.
Yes, I am one excited me!
Tim Wilson - blog.262quest.com
Posted by Tim Wilson on 1/23/2009 8 comments:

The day after the marathon

Tweet
I missed the date.  I know, not many people other than me care, but the date I missed was January 10th, 2009.  What does that date signify you say?  That date is the one year anniversary of this and my other blog blog.2big.org.
Another more significate anniversary has just passed as well.  It was two years ago this past first of January that I started down my new journey of losing weight and becoming fit.  More information can be found at my beginning post on this blog and as well my beginning post on my weight loss blog.
It has been a long journey, but one I am so glad that I have taken.  I just wish I would have made the decision earlier.
Tim Wilson - blog.262quest.com
Posted by Tim Wilson on 1/18/2009 5 comments:

Tweet
I have almost exclusively run by myself.  The only times that I ran with someone else was when I was running a race or when one of my kids went out with me for a mile or two.
Today was different, but a welcome different.  I was going to run yesterday but when I got up and it was only 17 degrees and I had limited time I gave in to the pressure and skipped the run.  I was gone most of the day and upon returning it was too late to head out for a run.
Now, back to the reason why today was different.  I decided to head out for a run, and when I told my son about this he asked if he could go.  I said sure, knowing that it would not be a run, but more of a run/walk.  I still would not pass up this opportunity for anything.
Brady, my 7 year old son, and I headed out the door.  My intention was to run the 1.2 mile circle with him, drop him back off at home, and then hit the road for a few more miles before calling it quits.  As we started to walk on the approach to the house my cell phone rang.  It just so happened that it was a friend that I have been asking to go running with for some time.  He had seen my Facebook status change that said I needed to go for a run and he called to see if I wanted to go running.  He caught me at the perfect time.
I dropped off my son and then ran over to meet him as he was walking up the really steep hill towards the main road.  We went for a run just over 2 miles.  It was a run/walk but was mostly running.  He is used to the treadmill, and hasn't run in a couple months so we are both just starting to get back into running.  He is more of a speed runner so we both gave each other some kind of a workout.
It was a lot of fun to run with someone else just for a fun run.  Hopefully we can get out a bit more in the future.  He said he isn't a distance runner, but I am hoping one of these days I can at least get him out to do a 5k race.... and maybe even a 10k race.... now that one is probably dreaming.  :)
Tim Wilson - blog.262quest.com
Posted by Tim Wilson on 1/18/2009 9 comments:

The lungs are starting to cooperate

Tweet
It has now been a few weeks since I have been back seriously running.  If you look back at my post on December 31st, you will see how I was kinda discouraged with how far I had to go.  I still have a long way to go, but I am already starting to see some progress as far as my lungs go.
My first couple runs my lungs were burning quite a bit.  I was discouraged quite a bit following these runs because I used to be able to hit the road for 6+ miles at a faster pace and not really even give thought to my lungs.  I then recall that it has been 7 months since that has happened and a lot of sitting around waiting for my collar bone to heal.
I have been very pleased over the past few days on how far I have already come.  Yes, I still do have a long way to go, but in the baby steps I am starting to get some welcome traction.  If I am able to run what I want to tomorrow I will top 10 miles for the week for the first time since my injury over 7 months ago.
I can feel the cheers as I progress, thanks for reading and the welcome motivation!
Tim Wilson - blog.262quest.com
Posted by Tim Wilson on 1/16/2009 5 comments:

My battery has run dry

Tweet
Today was the first time I have had to charge my MyTach GPS Sport Trainer.  While running this morning I was just finishing up my last tenth of a mile when I looked down and the watch was off.  When I run in the early morning I turn the backlight on so I can look down at any time and see how I am doing.  I am sure this drains the battery faster, but is a great feature when I run in the dark.
I am still very impressed with the battery life.  I have had it for just over 4 weeks and have not had to charge it till today.  The other thing I am impressed with is that it saved my run before going dead.  Sure it didn't get the last tenth of a mile, but it recorded everything up until the point it went dead.  The true test will be when I head out for my first marathon :)
Tim Wilson - blog.262quest.com
Posted by Tim Wilson on 1/13/2009 2 comments:

Tweet
I think it is about time to start the new year off with a post.  I hadn't realized that I hadn't updated you all since the first of the year.  I honestly thought that I had.
This week I finished off with actually getting out and running three times.  There was even some resemblance of a schedule to my runs.  It wasn't really all that structured, but it was somewhat like it used to be back at the height of my training last year.  I put a two miler in on Monday morning 5:00 am, and again on Thursday morning at 5:00 am.  I would have gotten out on Wednesday morning but it was raining and I am not quite back to that level yet..... although I will be soon.  I then wrapped up the week today with a 3.2 miler.  This is the longest I have run since my injury 7 months ago.
Today's 3.2 mile run started with the first mile run with my daughter, Payton.  We ran just over a one mile circle and I dropped her back off at home as I continued one more circle and then a short out and back distance to finish off my run.  It was a really good run, and I am happy for the new distance.  Each week I hope to progress a little bit more and push that distance a little bit more.
I am really enjoying my MyTach GPS Sport Trainer.  It really helps me worry less about where I will run and where the mile markers are etc.  I can just get out and go and it takes care of how fast I am running and how far.  It lets me enjoy the run more and plan less.  I will still have an overall plan, but the mapping out the courses will not be as important to me.
Till next time.....
Tim Wilson - blog.262quest.com
Posted by Tim Wilson on 1/10/2009 5 comments: