A step in the wrong direction

Tweet
I really didn't want to be saying this so close to the 13.1 marathon, but I think I have taken a step or two in the wrong direction.  Things were going really good as you could tell in my last post called Grease Lightning.  I wish I could say things are still going just as well as they were then, but if you have been following me on Twitter or DailyMile you know about my latest dealing with left calf.

Last Thursday I went out early in the morning for some hill repeats.  The workout went great and I got some good trash your legs hills in.  As is the case with any good workout, my legs were hurting for a couple days after the hills, especially my calves.  I wasn't feeling any injury type pain in my legs or calves so I was not worried in the least.

I had a little delima with my schedule, and didn't know how I was going to get my 9 mile marathon pace run in on Saturday.  Friday was my day off, and I really couldn't run 9 miles that morning with my daughter's XC practice being an early morning one.  The only option I had was to run it Friday night (which I wanted to be family time) or to run it really early Saturday morning before my daughter's XC meet.  Since we had to leave by 6:30 to get to the XC course I knew that wasn't going to happen either.  I chose to go to the XC course and to run about 6 miles before the first race that morning.

I started to run the course and now have much more respect for the XC runners and the courses they run on.  I have run trails quite a bit, but this course was mainly grass and was very uneven.  Every step was some kind of twist and turn on the feet.  After a couple miles my shins and calves were hurting so much that I had to stop.  I didn't think anything of this from a long term perspective because I had thought that I caught it in time.

The two XC races were run and my girls did awesome.  Two new PR's brought smiles to both of their faces as well as mine.  Payton ran in the Varsity race and she ran a new PR of 19:44, her first time breaking 20 minutes!  Ashlee ran in the faster JV race and finished with a new PR of 22:17. 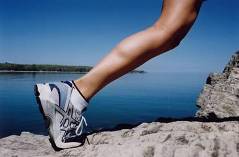 Early Sunday morning came and it was time for my first 19 miler of this marathon training schedule.  I felt good and sipped on water and Gatorade throughout.  I used some Shot Bloks at miles 8 and 15 both times seeing an increase in pace and energy shortly after.  I had an emergency (ok, emergency to me!) stop just before mile 8 when nature called and I had to listen.  I stopped by a local QT gas station and before I knew it was back on the road.  The real trouble started to come around mile 13 when I started to feel a tightness in my left calf.  I was paying attention to it and had decided that if it started to feel any worse that I would stop and call for a ride home.  Each mile ticked off and the calf felt the same so I really wasn't worried.  I really didn't start feeling the effect of the run on my calf till later that afternoon when I knew something wasn't right.  The details of my run and the splits can be found here.

The last few days have been an exercise in ice, using The Stick, and some rest.  I took Monday off just to give it a rest and see what kind of difference it made.  I went to the Running Club at Fleet Feet on Tuesday night and ran an easy 4 miles while they all ran a tempo run.  After a couple miles it loosened up and was feeling about 50%.  I gave it another day off yesterday and then went out for a 3 miler this morning.  This mornings 3 miler felt good, although I was nervous at first how it was going to feel. I started off slow and after about a half mile it had loosened up enough to speed up a little bit.  The rest of the run went great and my calf was feeling about 90%.

I am still not back to 100% and will probably take another day off tomorrow.  Suffice it to say this Sunday's 20 miler..... the first one of my marathon training..... is not going to happen.  I am not too concerned about being ready for my marathon as I still have time to recover and get those 20 milers in, however I am not so sure about next Sunday's 13.1 marathon.  I was looking forward to another half marathon PR, but I am know now sure if I will be running it, much less racing it.

Mentally it is bothering me, but I am not completely out of hope.  I think I caught it and have taken the right steps to getting back on both feet as quick as possible.  I just want to run pain free like I was just a week ago.