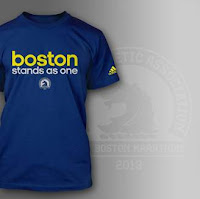 Boston/Portland, April 18, 2013 – adidas, Official Sponsor of the Boston Athletic Association and the Boston Marathon, today announced the launch of a limited edition “Boston stands as one” t-shirt.  The t-shirt is available at baa.org and adidas.com/bostontribute with 100% of the proceeds going to The One Fund Boston, Inc. in order to help the people most affected by the tragic events.  The One Fund Boston, Inc. was announced yesterday to support those affected by the tragic events that occurred in Boston on Monday.

“The selflessness and compassion demonstrated by the City of Boston, the first responders, the Boston Athletic Association (BAA) and all marathon volunteers in providing assistance to the injured have stuck with us and inspired us,” said Patrik Nilsson, President adidas America. “We commend Boston - and of those associated with the City and the Marathon - for their reaction to this very challenging situation.  We applaud them for standing together as one on Monday and in the days which have followed.”

The limited edition “Boston stands as one” t-shirt is available now at baa.org and adidas.com/bostontribute for $26.20.