The 13.1 Marathon Series stop in Atlanta for the first two years was centered around Oglethorpe University.  After some issues with the start in the inaugural running in 2009 some changes were made to the start of the race for the 2010 running which turned out to be more troublesome than the original start.  While I believe there are still some changes they could make to keep it at Oglethorpe, the challenges were big and the running community was starting to lose confidence that they would be able to pull it off. 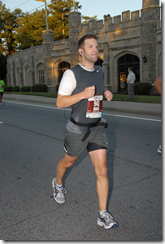 The newly announced course for the October 2, 2011 running doesn’t change what makes the 13.1 Atlanta course great, but aims to resolve the issues that were not able to be overcome easily while still keeping it at Oglethorpe University.  The start/finish will move a short distance down Peachtree Road to the Town Brookhaven development where Publix recently opened their new hybrid store.


The new start line has been improved and will feature wider lanes with less congestion allowing for a smoother transition to accommodate all the participants. For the finish line, Town Brookhaven will add a festive atmosphere for the runners who have completed their 13.1 mile journey and want to celebrate a personal victory.
“We are pleased to unveil a vastly improved start/finish line which will enable the runners a better opportunity for a strong start,” said Jeff Graves, 13.1® Atlanta Marathon Race Director. “By changing this aspect, runners will have a better overall experience on race day.

The news release in it’s entirety can be read on the 13.1 Atlanta News page or directly here: 13.1 Atlanta Marathon Announces New Start/Finish Area.  They have not yet updated the course map on the www.131atlanta.com site, but if you would like to take a look at it, I have it available here.  View the 2011 Course Map and if you would like to compare it to last years course you can also view the 2010 Course Map.  As you will see, most of the course remains unchanged if you are running the half marathon distance, however if you are running the 5k you will be in for a change that will encompass much more than just a starting and finishing change. 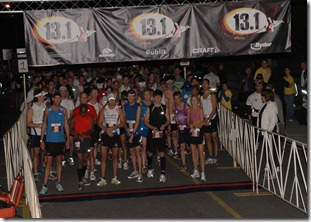 Have you run either of the first two years of the 13.1 Atlanta?  If so, what do you think of these changes?  I think the changes are a good move and will hopefully solve the issues that have plagued the start of the race in it’s first two years. I will, however, miss being able to say it starts and finishes at Oglethorpe University.  My one reservation is that it appears we will still be running down the same small road in the first mile that gave so many people issues with speed humps in the dark.  As long as they mark these adequately all should be fine, but we just won’t know based solely on a course map.

Are you planning on running the 13.1 Atlanta this October 2nd?  Have you registered yet to reserve your spot?  If you haven’t registered yet or if you are trying to talk a friend into running it with you, keep an eye out in the coming weeks for some really cool offerings.