Today was the second running of the Atlanta edition of the 13.1 Marathon series.  I have been looking forward to this race since I ran it last year and set a new Half Marathon PR....... that is, until I injured my calf just two weeks ago.  Once I injured my calf I released any hope of another PR this year and just focused on getting my calf back to 100%.  I wasn't sure until about a week ago that I would even be able to run it.  I decided then that I would run it for fun, and intentionally take it easy since I didn't know if it would start acting up, and didn't want to risk re-injuring as I enter the last month of marathon training.

The morning started early, as most race mornings do, and we hit the road at 5:30 to make the trip down I85, over to Peachtree Road, and into the closest parking place we could find near Oglethorpe University.  I rode down with my neighbors who were also running the race.  The morning was very cool at 55 degrees, which felt even colder in Atlanta with the wind that didn't seem to let up all morning. 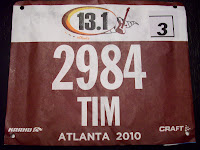 The starting line was set up a bit different than last year.  They had three corrals numbered 1, 2, and 3.  I never heard any information about who was supposed to be in these corrals, however I had a 3 in the top right hand corner of my bib.  We couldn't figure out how I got this number there and why others did not.  Others we spoke to were just as confused as we were.  Since I wasn't planning on racing it, and was rather planning on running it with my neighbors, I decided to just hang back behind the corrals.

Following the three corrals it just opened up and everybody stood all over branching off to both sides as well.  This made it a nightmare when the gun went off and everybody tried funneling down into the small starting corrals.  This caused a major bottleneck and was by far the worst starting I have experienced in a race.  We were still walking some and not able to run for almost 100 yards after the starting line.  The starting corrals were not perfect last year, but were much better than this year.

The first mile was dangerous.  I didn't see anybody go down, but there were a lot of close calls.  There were speed tables (long speed bumps) and because it was still dark and all the people around, they were impossible to see.  There are arrows painted on the one side for traffic to see them, but we were running the opposite way down that road and could not see them coming.  I saw at least two people after the race that had gone down in that stretch with some pretty good scraps and cuts.  One lady from our Tuesday Night Fleet Feet Running group went down in that area after tripping on a man hole and is going to need stitches on her chin.

During this first couple miles it started to get light and things got much better.  At about mile 2 the 5k runners pealed off. (all one of them from around our area)  At this point we were well on our way and starting to settle in to a comfortable pace.  My neighbor and I were running together and her husband was just a short 20-30 yards behind us.  We planned on running it together to keep each other from trying to go to fast.  I was running after my calf injury, and she was having issues with her knee from twisting it just about a week ago.  As we finished up the 3rd mile we realized we had run it a bit fast and try to slow it down a bit.  Following mile four we settled into a nice comfortable pace that would put us where we wanted to be for an easy half marathon.

Before long we were emerging from the neighborhoods and turning onto Peachtree Road.  This was the first time we started having a sizable amount of people cheering us on.  One very cool thing they did this year was to put our names on our bib's so people could cheer us on by name.  A very nice touch in my opinion (made me feel like Ryan Hall), but not enough spectators were taking advantage of it at this point so I felt the need to show them all my bib and tell them my name...... I then got the boost I needed from the added people cheering me on by name.

There is always a lot of spectators and cheerleaders as we run by Oglethorpe University and as we near the half-way point of the race.  As we come to the lowest point on Peachtree Road we cross the 10k timing strips and a couple guys taking care of business right along side the road.  We then make the easy climb up to Lowe's on the left and our next turn back into some more hilly neighborhoods.

As the neighborhoods begin we are headed downhill, but as every runner knows..... what goes down, must go back up..... and they did.  There were a few more of the families out to cheer us on in this neighborhood, probably mainly because the time was more friendly as we were passing by their homes than in the first set of neighborhoods at shortly after 7 am.  As we emerged from the neighborhoods we made a sharp left into a park.  We ran the cement trails and then over a bridge and into the woods for a short time.  We then made our way past some soccer fields before starting to leave the park. 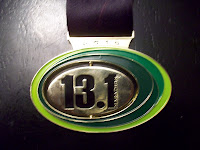 As we left the park we had a long climb, probably one of the worst ones of the entire course.  This is the point that I started to pull away from my neighbor as her knee was really bothering her badly by this point and she needed to walk a little bit up that hill.  The 10 mile mark came shortly before this climb meaning we only had a 5k left.  Before we knew it we were back out on Peachtree Road with less than 2 miles to go.  We reached the lowest point of Peachtree Road once again and started the easy climb up to Oglethorpe University and the highly anticipated Finish Line.

As I mentioned before, I didn't race today, but rather just ran it for fun.  My calf felt nearly 100% in my run Friday morning, but I was a bit worried about going out too hard and re-injuring it.  I was pleasantly surprised to feel no pain whatsoever during this race.  I could have gone faster, and wanted to a couple times, but am happy I ran it conservatively and maintained my healthy legs.  I crossed the finish line in 1:52:19, more than 7 minutes slower than last years PR, but I am still very happy with my time.  My 10k split was 53:56 which was about 5 minutes slower than last year.  You can see my splits here, and my official results here.

The water and food was plenty and set up just like last year.  I once again don't like how they only have water and food in the finishers shoot.  Once you get out of the shoot there is no more water and the only food is the sausage biscuit everyone was given.  We hung around for a little bit to talk to some other finishers we knew or met along the course.

Once again a very fun race, and one I will do again.  I just hope they get the starting figured out before next year.