Another Two PR's - But Not For Me

I can't believe the Cross Country season is almost over again.  I look so forward to this time of year and then it seems that it is all over as soon as it starts.  Now, sure, I would like to get my Saturday's back to do really important things like sit around, eat, and sit around some more...... but there isn't many other things I look forward to like I do Cross Country meets.  This is quite obvious when you find me driving 6 hours ONE WAY to watch my daughter's run.

This past Saturday my daughter's both ran in the Great American Cross Country Festival in Cary, NC just outside of Raleigh.  This was a very competitive meet, so much so that the winner of the boys and girls races both set new course records at 15:00 flat for the boys, and Aisling Cuffe won the girls race setting a new course record of 16:40 and was almost a full minute in front of #2. 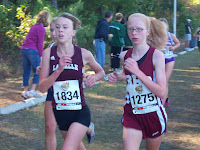 I debated a while whether or not I would go but in the end decided to go to cheer on my girls.  They both ran their best races, both resulting in new PR's.
Payton ran in the Race of Champions race, the fastest girls race of the day.  She ran an awesome race and PR'd with a time of 19:40.  This PR was only a 4 second PR, but was over the big PR she just set two weeks ago at the Gwinnett County race which is a flatter course.  This was her 4th consecutive PR. 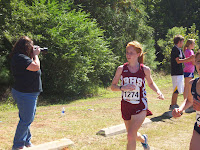 The most exciting story of the day was Ashlee.  She ran in the JV #2 race, finished 11th overall and first for her team.  She finished in front of a few of her team-mates that she has never finished in front of before and set a HUGH PR of 21:24 - almost a full minute over her last PR of 22:17 that she also set just two weeks ago on the flatter Gwinnett County course.  As soon as a few of her team-mates passed I ran over to see her come out of the chute.  She was beaming with her medal and was as proud as I have ever seen her.  I told her she was first for her team and her smile got even bigger..... if that was even possible!  I was so proud of her, and couldn't contain my tears.  I thoroughly enjoyed the entire day and watching both of my daughters race, but this moment made the entire trip worthwhile.
And to think I almost didn't go to watch them race!
I spent the evening driving the six hours home - a new kind of half marathon preparation.  It was probably not the best way to spend the evening before a half marathon, but I would do it all over again.