Last night was the big ending to the Fleet Feet Tuesday Night Group Runs. It was an end of the year race, with official race numbers, official course with police at every corner keeping the roads clear, and official timing. It was obviously low key but was also very well done with a great attendance. Age group winners got some really cool prizes, many of which were a new pair of shoes...... no I didn't win my age group.


It was a great race. It was 2.5 miles long, somewhat the same route we run each week, but backwards. The first mile was mostly downhill and many people went out too fast (including me) The second mile was the hardest and had plenty of uphills so the times adjusted quickly. The finish was good...... but aren't they all? :) 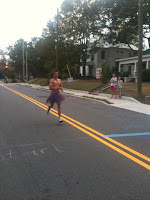 Trey Bailey, the organizer of the Tuesday Night Runs was challenged a few weeks ago to run this race in a Tutu if we ever got over 100 in attendance at any given night.  We came close in the normal Tuesday nights, but blew it out last night with nearly 175 racers and plenty more volunteers (including Payton and Ashlee!)

I wasn't going to go out hard because of the upcoming marathon, the 20 miler a couple days ago,  and less than 100% calf, but the race got the best of me.  I wasn't paying attention to the watch, but was running what felt good.  The first mile was mostly downhill and when I passed the first mile I was running at a 7:10 pace.  I didn't worry about adjusting anything because it was such a short race, but with the way the course then turned uphill my times adjusted accordingly with a 7:41 second mile.

The last 1/2 mile was kind of a tease for us that run with the group all the time.  We were headed back towards the finish line and then they made us turn for a last little jaunt before getting to the finish line.  Of course looking at the distance we knew there was something else we needed to do before getting there, but still a tease.  I ran the last 1/2 mile at a 6:54 pace or somewhere really close.  I am not sure the course was quite 2.5 miles as my GPS didn't record it that long, but I will say it was and accept the 6:54 pace :)  I take that back...... I am sure it was exactly 2.5 miles, but I did an awesome job of running all the tangents!