I Am No Longer A Runner 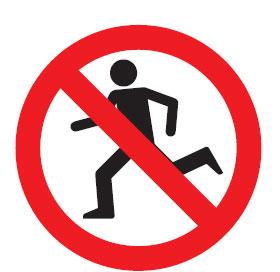 I am not sure when it happened or what all took place to make it happen, but I can no longer call myself a runner.  Runners just don't act the way I have been acting lately.

I have been struggling with what and how much I eat for some time now and have tried to fix it but have not yet been able to stop eating like I am running 40-50 mile weeks with long runs up to 20 miles.  I don't eat horrible, I just make occasional bad choices and almost consistently eat too much.

If the eating was the only thing I wouldn't be taking the time to write this, but I have also had issues keeping motivation up lately.  I really would like to fix this as well, but I am not sure exactly what is causing it or if it is a combination of things.  I am not sure if the winter months have derailed me, or if it is the fact that I am trying to deal with a small thigh injury which has been causing me to miss many days of running that I otherwise would have enjoyed.  There is also the possibility that I am depressed from being just 3 weeks out from the Publix Georgia Marathon, and no where near where I was in training for the first two marathons.

I have not put out a "goals" post for the Publix Georgia Marathon yet simply because I don't have any.  My training has simply been a "flying by the seat of my pants" type of schedule.  I was trying to build my mileage, but every time I did I would have to take a day or two off to let my thigh recover.  This lack of purpose and lack of a goal has lead me to a lack of desire to run on days like yesterday.

I knew I needed to run at least 12 miles, but life happened and I found myself at 6:00 pm with no desire to run.  I had eaten a healthy, but big lunch, and had taken a nap.  By the time 6:00 came I realized I had not hydrated like I should have all afternoon.  It wasn't that I had not hydrated for a long run, but simply had not hydrated at all.  I fought the urge to skip and finally got dressed and out the door.  I fully expected to cut it short and give up midway through so I didn't take any GU or fluids with me, setting myself up once again for more failure.

In the end I did finish my 12 miles, and it turned out pretty good considering.  I paid dearly later on in the evening for not hydrating well and ended up more sore in the few hours following than I did after last weeks 16.5 miler, but I was happy that I got out there and put the miles in.  I even had the opportunity to easily cut it to 10 miles by just finishing, but wound around a bit near the end to add the last 2 miles of the plan.

True runners do not define themselves using the terminology and stories that I have written so I can no longer call myself a runner.  I am hoping I get the mojo back soon because this is really wearing on me.  I want to call myself a runner again, and soon.

Do you ever feel like you are not a true runner?  What do you do to break the downward cycle?