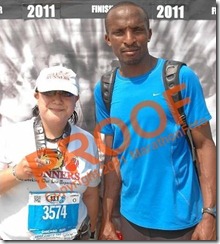 How many times can you say that you have met an elite runner, the one destined to win the race you are running, while riding the shuttles to the start of the race? That is the story that Mary, aka The Running Green Girl, is telling after her experience last week in the windy city.

Mary was selected as the race entry winner right here on 26.2 Quest after a couple rounds of others that were randomly selected first, but could not use the entry for one reason or another. I have to say now that it was destiny that it turned out the way it did, considering the turn of events that day for The Running Green Girl.

Unless you have been hiding under a rock I am sure you have heard about the trouble that was experienced at the 13.1 Marathon in Chicago last week. A race that was stopped early by the race organizers and a runner that lost his life while attempting to run through the extreme temperatures. 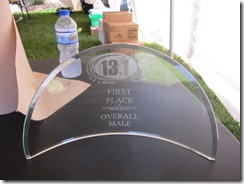 After reading about the events of the day I saw Mary post on Facebook that she was waiting for her flight home so I took a moment to apologize for the turn of events. She quickly replied and then asked if she could call me.

I have to admit I didn’t expect to hear what she was about to tell me. She explained how she met Moses Waweru on the shuttle, and how he later won the race. I won’t go into all of the details here but I am going to suggest that you head over to The Running Green Girl blog and read both her race report, as well as the story about her adventure. This is a story you cannot make up, and I feel privileged to be part of the events that set the wheels in motion for something that Mary will never forget.

Have you ever had something happen to you at a race that you will never forget?