Saucony Is Going Minimal, Are You?

Lately Minimalism has become all the rage.  It is either barefoot running or differing levels of minimalist shoes.  Have you jumped on board yet or are you still watching from the sidelines?  This past year we have seen some sort of minimalist shoes from nearly all the top running shoe manufactures.  One of the most interesting of course has been the Vibram Five Fingers as I mentioned in a recent post, but Saucony has recently taken it to a new level.

In the past year Saucony has come out with three different minimalist shoes, each with a little bit different focus and varying levels of minimalism.  I have had the opportunity to run quite extensively in the original Kinvara, of which now there is a second iteration in the Kinvara 2.  I absolutely loved what they did for me, and I hope to find out someday what they have done with the new version to improve on what I thought was already an awesome shoe.  The only downside to the Kinvara is that I couldn’t go long distances in them because of the lack of support for pronators like me. 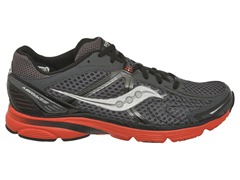 I found myself talking to people quite a bit about the Kinvara’s, always saying that I needed a bit more support for longer distances.  I wasn’t even aware they were working on anything like what I was talking about when they introduced the Mirage line which was just that, the Kinvara with a little support for pronators.  I have been running in the Mirage’s recently and will have a review before too long on what I think about them (hint…. I love them!) 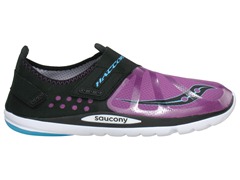 And now, Saucony has taken what they previously called minimalist shoes to an all new level with the recent release of the Hattori.  These shoes remind me of slippers in a way, but they like to refer to them more like a mitten in how they fit and allow the foot and toes are allowed to move naturally.  I am really excited that I get the opportunity to run in and review a pair of the Hattori’s, and even more excited since they just arrived on my doorstep today. 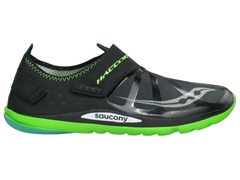 Have you seen the Saucony website this past week?  In honor of the release of the Hattori, their website has gone Minimal.  This look is only lasting a short while and will be gone before you know it so make sure you click through as soon as possible.  Of course, I am always looking out for you, and if you missed it, you can view the screenshot I took before it disappeared.

So you are asking What is Minimalism Anyway?  Saucony has put together a great video that explains minimalism, the risks, how to choose the right shoe, and how to carefully take the steps into minimalism. 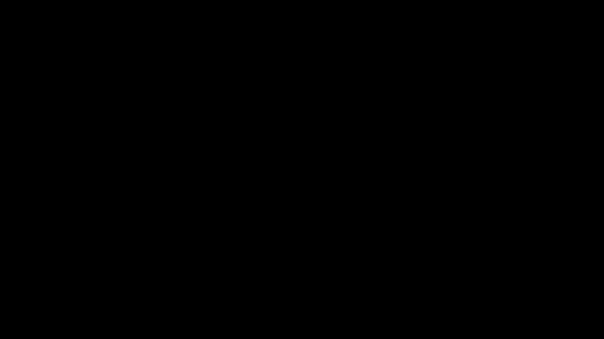 What are your thoughts on Minimalist Footwear? Have you tried making the switch either completely or in part?  Make sure you Join the 26.2 Quest Facebook Fanpage, follow @262quest, and subscribe via RSS or Google Friend Connect to make sure you don’t miss my upcoming reviews.