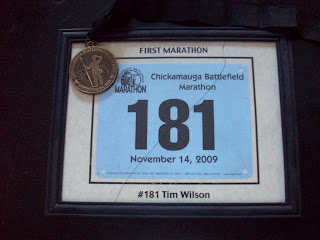 I took that last step and the volunteers where right there to hand me my medal and shortly after my framed bib saying "First Marathon" I have heard about the emotions at this point, and yes I teared up for a moment getting caught up in the moment. "I just finished a marathon!" I had done what very few others have done or ever will do! I am a Marathoner!
I was not where I had set off to be at under 4 hours, but I had crossed the finish line and I had a time of 4:18:51 according to my watch. The official results were posted later in the day and are here. I finished 244th out of 469 and 33rd out of 61 in my age group. My mile splits can be viewed here on my running log. I am not at all upset with what transpired. I am thoroughly excited and proud of what I have accomplished. However, that doesn't mean I will not be critical of myself, that is how we learn and get better next time...... yes, there WILL be a next time :)
Right after the finish line my buddy and his parents were there waiting for me. They had hung around after he finished to be there for me. He too had a similar experience to me and we exchanged war stories. I was grateful to them for sticking around to support me.
I got some pizza and some other post race food and hydrated a bit. I felt hungry but also felt like my stomach was a bit upset. It was probably because I had totally depleted anything I had in me. I still felt kinda icky for about 30 minutes after the race, but I knew I needed to eat something.
I went over to my neighbor and she was still waiting for her husband to finish and was getting worried. It was about 4:45 now and I told her not to worry that I didn't expect him to finish till about 5 hours. He had not trained much at all and had never run more than 15 miles so I knew based on how I was hurting he was hurting much more. He crossed the finish line walking shortly after the 5 hour mark with his shoes untied because his feet were swollen. He had walked the last 6 miles in horrible pain, but he had completed it. He said he would never do another one (but today he said..... maybe)
***forgot to add - last minute addition: As we were getting ready to pull out of the parking lot I pulled out my 26.2 magnet - my car is now adorned with it's very own 26.2 oval magnet..... before she was even started the first time post race!
To wrap thing up: I was very happy with the course, it was a great half or full marathon course. The race was well organized and well run. The packet pickup was great, the food was great and the way they treated the runners was great. All of the water stops were great, and the way they handled the runners at the end was also great. I would do this race again without any hesitation. The Chickamauga Battlefield Marathon gets my thumbs up - thanks to everyone that helped!
What will I do differently next time? The only thing I will do differently is train up to the distance of 26.2 miles. Almost every training program out there takes you up to 20 miles as your longest run. I was worried about this during training and wanted to get my longest run up to 24, but after my 21 miler the next 20+ miler didn't go well and I stopped at 20 miles. I didn't have time in the schedule to get past the 20 mile mark again.
If you are stopping by for the first time you need to read my pre-marathon report. It gives a lot of information on my journey to my first marathon. As I stated in that post, the journey is just as important as the actual event.
Thank you everyone for the support along the way. All my internet friends played just as much of a part in my journey as those directly in my life.
I also want to especially thank my wife. I am the luckiest man alive. I know many of you think the same thing about your wife/husband, but I am sorry that you are wrong :) She has put up with so many things along the way. Having to deal with me complaining when my shorts/shirts/socks/etc were not clean or where I could find them, to having to be awaken by my really early morning runs when I was a bit too loud. She went to bed early so it would be easier for me to go to sleep when I needed to get up at 4:00 am to run, even though she is a night owl. She listened to me when all I wanted to talk about was my run and how it went, how it could have gone better, or what part of my body was aching now, but most of all, she encouraged me and believed in me :) Thanks Lisa - I Love You!