My First Trail Run - A Tweetup

Today was a day for firsts.  My first trail run, and my first Tweetup.  As I mentioned yesterday, @Bamarunner contacted me some time ago saying that he was going to be in the Gwinnett area around Memorial day and was wondering if I would want to get together for a run. Next thing I knew a few other local Tweeting Runners were joining us as well.

This morning at 7:00 am @Bamarunner, @SamanthaUF, @LostTrailRunner, and @virtual4now (thats me) were lead through some trails at Stone Mountain Park by @aReyoUiN. Like I said this morning was my first ever trail run and I absolutely loved it.  I know what you are saying, if you didn't go down and eat some dirt it was not officially a trail run, but what I reply with is that 2 of the 5 did go down so I am still counting it :)  You can even see the proof that Samantha posted of the trail rash that occurred while the trail also tried to take out her Garmin.

We arrived just before 7:00 am and the others were shortly behind.  One of the runners tweeted us that she was they were running a few minutes late because she they left the house in flip flops and needed to head back to get her their shoes :)  This didn't put us behind at all so it was no problem.... just kinda funny.

While I was waiting I decided I would take a bathroom break.  I walked into the bathroom and imagine my surprise when there was a man sitting there with the stall wide open taking care of business.  He apologized and continued with his business.  Let's just say maybe in his country this is more customary, but here I would have to disagree.  Next time please close the door :) 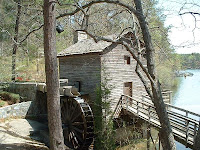 It was a lot of fun to meet everybody and to go for the trail run.  We ran around the perimeter of Stone Mountain, past a water wheel, along the lake shore, across the railroad tracks, with more turns than I will ever remember.  I really wish I could remember all those turns because I would love to go back out and run it again and maybe even with my girls.  If we had stayed on the main trail that would be one thing but it seemed like we were off the main trail  more than we were on it.  The entire run was somewhere between 5.5 and 6 miles.  Three of the Garmin/MyTach watches gave three different distances but mine came in at 6 miles so that is the one I am going with. :)

I found a new love today and I will be visiting it often.  Whether it is at Stone Mountain next time or not, I am sure I will do another trail run soon..... and maybe even a trail race.  It is something I have not done before mainly because I just didn't know what to expect or how to go about it since I do 90% of my running solo.  I hope to pass this new found love on to my daughters very soon.

Have you ever done a trail run?  What about a trail race?  If so, where have been your favorites?

(as a side note, these are not pics I took today, but are pics of the area)