Have you ever got lost on a run?

I can't say that I have ever got lost on a run before, at least not to this extent.  When I stepped foot out of bed this morning I didn't realize what was awaiting me.  Would I still have gotten out of bed and gone for this same run?  Sure.  Would I have changed a few things about it?  Yup!

This morning was going to be a little bit different than most morning runs for me.  I dropped my daughter Payton off at school for Cross Country practice this morning at 5:40 and just headed to work to run there since I needed to get 10 miles in and didn't want to break the run into two 5 mile runs like I did last week.

I knew it was not going to go good when I forgot my MyTach GPS watch at home and didn't realize it till I got half way to work.  I didn't know the area that well and was relying on the GPS to tell me how far I had gone so I could make sure I got the full 10 miles in.  I did still have the MiCoach in my Blackberry so I still had a way to track that so not all was lost.

I got to work and turned on Pandora on my Blackberry and started the MiCoach.  I got less than a quarter mile into my run and the MiCoach told me it had lost the GPS signal.  I had never had that happen before so I kept running assuming it would pick it up pretty quickly.  After another quarter mile I realized that wasn't going to happen so I stopped to check it.  Just as I stopped two ladies came running past - they must have been stalking me :)

I got the MiCoach to connect to GPS again, and then my Blackberry locked up and then rebooted.  I gave up and just started to run again figuring I would deal with it later after it finally came back up.  I quickly caught back up with the ladies that were stalking me.... I mean that just passed me.  I didn't want to seem like the stalker so I picked up the pace a bit to pass them and let them once again become the stalkers. (my ego feels better that way too - not very often do I get two ladies to chase me - that pleasure is usually only reserved for one lady..... my wife)  They were running a good clip and there were some hills through the area so it made it a quicker first mile than I wanted it to be.

I came up to my turn and so I stopped to get my GPS going again so I knew how far I was going.  The two ladies passed me shortly after I did that and it was the last time I saw them (I guess they weren't stalking me - ego crushed!)  Pandora started playing again, and MiCoach synced up with GPS pretty quick.  I was back at it, now just wondering how far that first part was.  I was going to have to guess so I made sure I got the full 10 miles in.  I am a stickler for my distances so this was stressing me out a bit.

The morning was great and it was a nice 50 degrees.  The only thing is that I wished that I had not wore the long pants and long sleeves.  My rule is usually 50 and up I go with shorts and short sleeve, but today I still went long/long even though it was 50 degrees.  I was happy to have my gloves and kept putting them back on after trying to run without them.  My fingers always get really cold when it is even marginal.

If you have been following my training on DailyMile you would know that I started to have some issues with my left Achilles Tendon.  The issues started during last Thursday's 10 miles, but really started to worry me during my 12 mile run on Sunday.  I had a couple good 5 mile runs with little to no issues Tuesday and Wednesday.  About 4 miles in my Achilles started to get a little sore.  This route was a little bit more rolling than I thought it would be and so I think it was taking it's toll on my already weak Achilles.  The pain started to lessen and eventually went away before finishing the run.

I ran out about as far as I wanted to (hit the first major road) and turned around.  I was guessing that the first un-measured bit was just shy of a mile so I was going to try to get back to that point at about 8 miles.  Based on my turnaround point it looked like I may need to add just over a mile once I got back to the office. 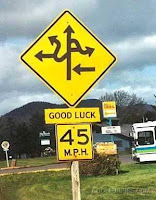 After running for a couple more miles and making all the correct turns (so I thought) I found myself at a road that I needed to turn right or left at.  I didn't recall making a turn on the way, but it was still quite dark and I didn't know what else to do so I turned right.  Next thing I know I found myself coming up to a school that I thought I had passed just over a mile earlier.  Confused and bewildered I turned around and tried to head back to find where I went wrong.  I thought I had found my miss-direction and this time took the right path (so I thought - do we see a trend here?)  I ran for a little bit more and passed something that I knew I had seen before, but once again I knew I was even further away from my destination this time.

I was almost to the 8 mile mark according to my miCoach GPS (not including the original non-measured distance) and I realized that I was not getting anywhere.  I stopped and pulled out my Blackberry and decided to pull up Google Maps to see where I was and how to get back to the office.  It told me I was 2.4 miles away from my office and how to get there, but I didn't know which way to start running.  I didn't want to run for a half mile and realize I was running the wrong way.  Just then I saw a lady walking towards me down the street.  I ran up to her, apologized for the intrusion and asked how to get back to where I was headed.  She asked me to walk with her (she was trying to get a workout done and get to work as well) and she told me which way to go.

This afternoon I pulled up the MiCoach website to look at my run.  I wanted to see where I had gone wrong and where I had actually gone.  You can watch the 30 sec video here.  If you follow the video you will see where I started the GPS the second time (the green pointer)  The direct path from the red pointer to the green pointer was the beginning of my run that I had techical issues with.  The crazy part is that  at about 6.5 miles I came right back to that same corner where I started the GPS and thought it was a different corner so I turned around.

I eventually found my way back to the office.  When I finished the MiCoach gave a reading of 9.64 miles.  I checked the technically challenged area and found that it was around 1.3 miles.  I guessed at my pace during that time (I was being chased remember!) and then filled in the rest of the mile splits from the GPS.

At the very least I can say it was an interesting run.  It was nice to run in this area, and there were a LOT of people out running and walking - much more than around home.  The total mileage was just shy of 11 miles.  This was only 1 mile further than I set out to do so I can't say that getting lost affected me by that much.  It could have been much worse and I am sure many of you could tell me of times you have gotten lost that the outcome was not so kind to you.

I headed back to the office, showered and got to work.  Oh yea, breakfast tasted really good after 11 miles, even if it was left over Enchiladas, Black Beans, Gatorade and Coffee :)

Will I run it again? Probably.

Have you ever gotten lost on a run?

Have you checked out the giveaway going on right now? $50 Gift Certificate