Region 8 AAAAA isn't the hardest cross country region in Georgia, but it is definitely one of the hardest and fastest.  This past Saturday was Regionals for my daughter's Ashlee and Payton.  Brookwood is in Region 8 AAAAA and they weren't running till around 10:30, which was one of the latest races they ran all year.

The Brookwood girls swept both the JV and Varsity races and both Ashlee and Payton played a key part in those wins.  Both of them had a great day and ran great despite the late start of the race and the seemingly slow times that everyone was crossing with.  In cross country the top 5 for each team are the scorers for the team and both of them crossed 5th overall in their respective races. Ashlee ran in the JV race and ran a 21:38.  This wasn't her best time and she was a little bit upset that she didn't set a PR, but she finished 5th for her team and 5th overall.  This was a great race and she held strong the entire race and was key in helping her team score a perfect 15 - bringing 1,2,3,4,5 (and even 6) across the finish line before any of their opponents.  They continued to sprinkle in quite a few more runners within the opposing teams as they continued to bring the rest of this massive team across the line. 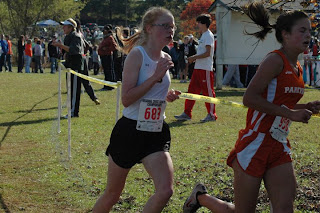 Payton ran in the Varsity race and ran a 19:53 officially, but I had her at 19:48 so I think they started the clocks a bit early.  Usually you expect to be a second off, but 5 seconds is a pretty big difference and being a runner myself I am kinda obsessed with hitting the watch with the gun.  This wasn't Payton's best time but it wasn't supposed to be either.  She was supposed to go out conservatively and the only goal was to win as a team.  Their coach is saving them for State when it really matters. 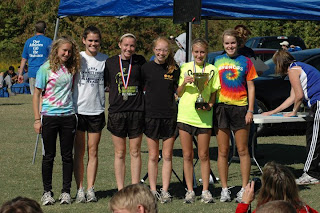 Payton finished 5th overall and 3rd for her team just behind the first runners for Parkview and South Gwinnett.  Two of her teammates took first and second in the race.  The other two runners for Brookwood came in a little behind her to round out their scoring and secure their place of champions for Region 8 AAAA.  This finish also gave them a place at the state meet coming up on November 6th.  The cool thing is the fact that she finished 5th overall means that she also qualified for state individually which is generally for fast runners that don't have a team that go to state.  How cool is that to get a double qualification for state? :)

Tomorrow is the big State race and Payton and her team are already over in Carrollton, GA.  They have run the course this afternoon and I am assuming they are getting ready to get something for dinner shortly.  We will be heading over in the morning to watch her run in her second state meet.