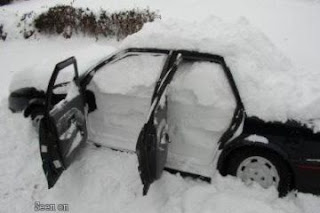 These past few days have been interesting to say the least.  Some may be going stir crazy, but I am not sure that is how I would describe what has been going on in our house these past few days.

If you are from the Southeast what I am about to say is not news to you, and I am willing to guess most of the rest of the United States have heard and maybe even chuckled at our expense (unless you have been stuck in a airport somewhere because ATL has been closed as an airport, but open as an extended stay lodge)


As I mentioned in my last post about Snow Running With The Kids, we were hit Sunday night with one of the biggest snowstorms to hit Atlanta in many many years.  We got about 7 inches in all at our house, which is by far the most we have gotten since moving to Atlanta 11 years ago.

Since I grew up in Michigan, Indiana, and a little in Wisconsin snow is nothing new for me.  When we first moved to Georgia we used to laugh at those around here because they wouldn't go out when there was a little snow on the roads, but over the years we have begun to look at things through a different lens.  Does that mean that we are getting soft and just can't handle the real snow anymore?  Probably..... but I like to look at it from a little bit different angle.

One thing I have heard over and over again, and I fully agree with now is that Atlanta is just not equipped to handle snow like this.  Further, they are also not equipped to handle the ice we do often get at this time of year.  I am sure there are a few snow plows in Atlanta, but not enough to clear all the streets they need to clear and I am also sure there are salt trucks around, but 2 of them spreading sand doesn't do anything..... just sayin!

What I have come to understand and accept is that when we get hit with something like this in Atlanta the only thing we can do is wait it out.  We got the snow and then freezing rain right behind it.  The road crews never had a chance or a prayer.  Since that time we have not gotten above freezing other than by about 2 degrees for 2 hours yesterday.  The sun did not return till today so nothing was melting.  Today the temperatures have not gotten above 28 so the limited melting the sun was doing has not been enough to do what is needed to the roads in the neighborhoods.

What this has meant for us is that the kids have been off school for the past three days, and will be out again tomorrow.  I too have not been able to make it to work, with today being the first day I would have even been able to get up and out of the driveway because of the slope.

The other thing this has done is it has put a damper on our running.  We ran as a family (Ashlee, Payton, and I) the first day after the snow when it was still soft enough that we didn't risk much by the way of falling, but these last two days the ice and frozen ridges have just been too dangerous to get out and run in.  We may try to go out in a little bit and asses the situation but life isn't alway about running!

What do you think about how the south is with snow and ice?  Do you run in the snow?  What about the ice and ridges of frozen snow in the roads?

Speaking of running with my kids, why not stop by and join our new Family Running community on Facebook?

Don't forget the two giveaways going on right now - Here on 26.2 Quest there is a giveaway going on for a set of Yurbuds, while over on my other blog 2 Big there is only a couple more days to win the Mind Over Fat Matters book.