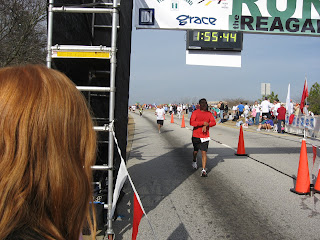 OK, that is not the official time, but I started my watch when the gun went off, even though it took me about 20 seconds to get over the line. There is still a lot up in the air, but as you will see in the picture that yes in fact that is me (in the white and black) crossing the finish line, and there is the clock..... what more can I say? Whoooooo Hoooooo!!! (OK, so you can't quite tell? Click the picture I uploaded it in full size so there would be no question) I will put a picture up in a little bit when I was walking out the door so you can see the same black and white - that will be proof for sure since nobody else wears white and black. 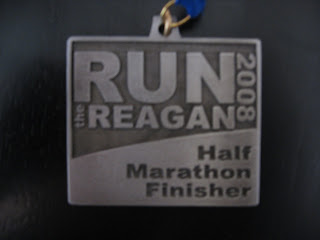 First off, I have to start with the weather, we couldn't have asked for better weather. It was a little humid but you couldn't tell because with the 50 degrees and cloudy skies it was just perfect.

I started the morning at 6:00 AM, that is one of the good parts to a local race, I didn't have to sleep in a hotel, or get up really early to drive. The drive took me about 5 minutes.

I had a cup of coffee, a half a banana, half a piece of wheat bread, and a small cup of Oatmeal..... oh yea, and some more water.... like I haven't drank enough of that over the past 24 hours! 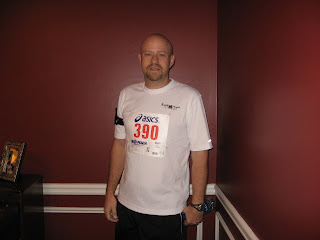 My wife got up to give me a good luck kiss, even though she is not a morning person. She decided that she and the kids would get there to watch me finish since it wouldn't be a whole lot of fun to see me stand in a pack and then have to find something for she and the kids to do for ALMOST two hours.... not two hours - but ALMOST two hours. :) She took a picture of me as I was headed out the door. Watch on arm, cell phone and license on my arm, and gu in my pockets. I was ready to run!

The other beauty of a local race was that it didn't take long for me to find some people I knew. This helped me pass the hour wait I had till running time. Some of them were running the shorter races, but at least two people I knew were also running the half.

Well, to get this part out of the way since I am SOOOOOO excited and thankful for this. My ankle didn't give me one bit of trouble, not even a twinge the entire time!!!! Not a peep from the legs, ankles, or feet the entire race other than being just flat worn out in the last few miles.

I started the race back in the pack a little bit trying to force myself to take off slower. Well, that was my first mistake. It took me quite a bit of dodging to get around the slower runners which was quite frustrating. The first mile I felt like I was crawling, I was just sure I was going to see at least a 10 minute pace by the end of the first mile. Imagine my surprise when the watch said 8:20, and that was with 20 seconds to cross the starting line. CRAP! I did what I didn't want to do, I started too fast! Well, the past is the past and I did my best to just try to get into a comfortable cruising speed that I could maintain throughout. I just kept at what I thought was a comfortable pace, and the second mile came in at 8:11. Now I knew my body was just messing with me and was going to get the good laugh at the 10-13 mile mark.

I continued on with the first half of the race and felt really good, I opted for water at all the stops that I took anything. I used my first gu at about mile 5 1/2 as I was coming up on the water stop. My first 6 miles had been at an 8:30 pace, a full 30 seconds faster than what I was shooting for.... but I still felt good. I knew I would pay for it at the end of the race though.

I made the half way turn and knew I was under an hour, not just under an hour, but well under an hour. I was elated! I used my second gu about mile 9, and things were still going good. My pace started to decrease in mile 10 as I figured it would since I had not run the first half where I should have. It was closer to the pace where I needed to be for the Sub 2 so I knew it was still well within line of my goal.

Mile 11 was a difficult mile, it was one of the three hills that were the worst of the entire race. These were the hills everyone was talking about. They don't seem near as bad when you drive them... go figure.

Mile 12, and mile 13 absolutely killed me. After running the race I had so far I was not ready for the hills in these two miles. I ended up having to mostly walk up the 2 hills, one in each of the last two miles. I just didn't have enough to get me to run those two hills. I guess this is why everyone I talked to that had run it before had told me it was a difficult course and that the hills were a killer..... because they were! I didn't recognize any of the other hills, they were there but didn't bother me, but these last three were enough to do me in. My pace showed it in these last two miles especially where they were 10:11 and 9:53 respectively. Now, does it bother me that I had to walk these hills? A little, but not enough to keep me from being elated and wearing my medal with honor!

My legs were tired and felt like jelly, but as far as pain the only pain was pain of actually running a half marathon, not of injury. Muscle pain feels good after a good hard run!

At the finish line, my wife, and kids were there to cheer me on. They brought me a towel and my son gave me a hug. My wife and daughters pulled away when I tried to give them a hug. When I got back to my car I noticed I had a little bleeding as is common amongst us men with perky and well defined pectoral muscles - how do you like that explanation? :) When I got home my one daughter said - yea I noticed that but I didn't want to say anything because other people were around. :) I am happy to say as I sit here typing the worst pain I am experiencing is pain from my nipples :)

Well, that is the story of my First Half Marathon...... and I am pumped!