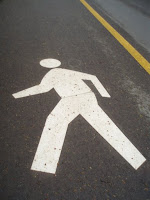 But you all know me well enough to know that I cannot leave it at just that. So what is it with drivers and their disrespect for runners? I am sure we all have stories of drivers and what they have done to use, or not done for us.... etc. (if you have a good story post a comment!)

I have had some interesting times with cars, and their drivers over my short running time. One of my most interesting was when a car swerved like they were intentionally trying to hit me during one of my early morning 8 mile runs.

This morning I was running a normal route and this part of my route was in our neighborhood. I was coming up past a side street and a car was coming up to the stop sign as I was entering the intersection (without a stop sign on my street - the main street) Now, mind you I will usually slow down, speed up, run behind the car, etc when coming up to an intersection just because I know most drivers are inconsiderate and/or not paying attention, but this morning I was clearly coming into the intersection before the car even arrived. The driver proceeded to run the stop sign and continued to roll forward coming within just a foot of me, never stopping at the stop sign or at all and apparently trying to tell me through his actions that I was in his way. Why is it that these people are allowed to drive? These are the people I think about when I hear about pedestrians getting hit by a car. I know there are some careless pedestrians and runners, but more times than not I think it is just an inpatient driver thinking that he doesn't have to slow down or stop for a pedestrian or runner -l just my 1 cent!

I think we need a national campaign (maybe there already is one) that is similar to the Share the Road campaign for motorcycles or bicycles.