Tweet
Well, I knew what the forecast was, but I still wanted to get my long run in.

The run started with 36 degrees and it was raining. I was taking off on a new course which was a 8 mile circle. (as a side note, you can see if you look at linked map of my running route, I passed by the Ronald Reagan Parkway - this is where my First Half Marathon will be run in less than a month) After mile two I started seeing and feeling sleet mixed in with the rain. By the time I got to mile 3 snow was starting to make it's appearance. I stopped at a gas station to get some gatoraide just about mile 4 and then continued on in the snow. As the run progressed, so did the snow. By the time I got to mile 7 it was starting to stick. 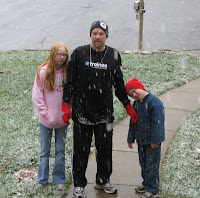 The picture to the left was as I was walking back up to the house following my run. You can see I actually even have some snow on the front of my shirt just like cars have from driving into the snow. Wow! I must run fast! :) OK, maybe not.

The forcast changed a couple times, but they are still saying we will get between 1 and 2 inches, which is a lot for here in Atlanta. I think I was turning a lot of heads this morning as people passed me by on the roads. I didn't see any other runners and only a couple people walking their dogs.
Posted by Tim Wilson on 1/19/2008